Yes, you can see theater for less 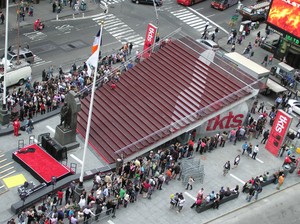 If you've been to a show on Broadway lately, you know that even a single ticket isn't cheap -- $100 is at the lower end of what it costs for a decent orchestra seat to most shows.  If you're going with a spouse, partner, date or the kids, as the bridge-and-tunnel crowd might say, "Fugedaboudit.''

Actually, though, you really can see theater for less.  Since 1973, the Theatre Development Fund (TDF) has been selling half-price, same-day theater tickets to Broadway plays and musicals in Duffy Square at Broadway and 47th Street.  Those long lines you'd see snaking around the square before matinees and evening performances were tourists and New Yorkers hoping to get a deal (50 percent off, plus a service fee) on a show.

Those tickets used to be sold out of a trailer. But as of yesterday, the TKTS Discount Booth is an architect-designed thing of beauty.  Australian architects John Choi and Tai Ropiha won a competition to create the booth, a fiberglass shell within an all-glass structure under a glowing red glass staircase, which sightseers can climb for an elevated gander at Times Square.  The booth has a dozen windows, including one for plays only (where there's far less waiting time), and tickets to Broadway, Off-Broadway, music and dance events are available.  TKTS operates from 3 p.m. to 8 p.m. Monday and Wednesday-Saturday, 2 p.m. to 8 p.m. Tuesday, 3 to 7 p.m. Sunday for evening performances; 10 a.m. to 2 p.m. Wednesday and Saturday, 11 a.m. to 3 p.m. Sunday for matinees.  For more details, check the TDF web site.

Closer to home, you can also see theater for less, and you don't have to stand in a long line to get the discounts.  WLRN Radio and Television and the Theatre League of South Florida have partnered in Cultural Connection, an online program that sells half-price tickets (plus a $4.50 per ticket service fee) to shows at most South Florida theaters.  Theaters offer unsold tickets up to 5 p.m. each day.  You pay with a credit card, and the tickets are waiting for you at the box office that evening.

At both TKTS and Cultural Connection, you can't always get that hot show you want (a ticket to Wicked or Jersey Boys, for instance).  But you can save some serious money.