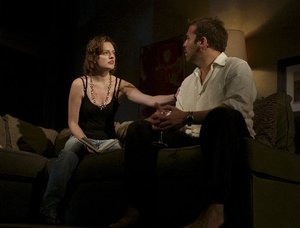 Entourage star Jeremy Piven (shown here with Elisabeth Moss of the TV hit Mad Men) was to have appeared in the hit Broadway revival of David Mamet's Speed-the-Plow opposite Moss and ex-Miamian Raul Esparza through Feb. 22.  Not any more.

After missing two performances earlier this week, Piven abruptly quit the show.  His doctor told the showbiz publication Variety that Piven was extremely fatigued and had been diagnosed with a high level of mercury in his blood.  Mamet's quip to the publication (sans the obscenities that pulse through so much of his work) was this:  "I talked to Jeremy on the phone, and he told me that he discovered that he had a very high level of mercury.  So my understanding is that he is leaving show business to pursue a career as a thermometer."  Ouch. But out of lemons, if one is lucky or well-connected, can come lemonade.  Understudy Jordan Lage is playing Piven's part through Sunday.  Then Tony Award winner Norbert Leo Butz will take over Dec. 23-Jan. 11, followed by Oscar nominee William H. Macy Jan. 12-Feb. 22 (Macy is shown here in Mamet's Edmond).

Macy is a longtime friend of Mamet.  He has appeared in New York productions of American Buffalo and Oleanna -- he is great at acting Mamet's work. And I'm betting that watching Macy and Esparza tear into that Speed-the-Plow dialogue is something that lots of ticket buyers will want to do.