The Caldwell's show goes on 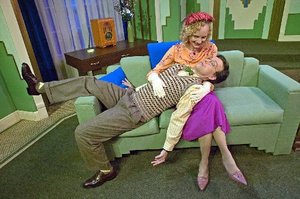 Boca Raton's Caldwell Theatre Company has endured more than the predictable amount of drama with its current production of the romantic musical She Loves Me. Leading man Benjamin Schrader, playing the role of the perfume shop clerk Georg in the Joe Masteroff-Sheldon Harnick-Jerry Bock musical, soldiered through a flu bug during rehearsals and previews.  But he felt so terrible by opening night Nov. 14 that the cast had to do a concert version with another actor subbing that evening.  Schrader got better, returned, and the show has been doing well ever since.

Now comes the news that Schrader has nabbed a role in the touring production of Avenue Q (which, coincidentally, will be coming to the Broward Center Dec. 30-Jan. 11), and he has had to depart She Loves Me  The Caldwell and director Michael Hall got lucky with a new choice for Georg:  As of tonight, Terry Hardcastle plays the man who fights with and falls for Amy Miller Brennan's Amalia.

Hardcastle is a veteran, award-winning leading man in both plays and musicals.  He has worked at the Caldwell often (that's him, with Kim Ostrenko, in the Caldwell's Lend Me a Tenor), and is in demand all over the region.