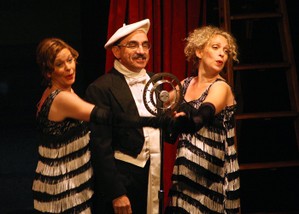 Two shows -- one a musical by Montreal's Yiddish Theatre, the other an original music-theater work by the New York-based Nine Circle Chamber Theatre -- arrive in South Florida this week for brief runs.

Those Were the Days by Zalmen Mlotek and Moishe Rosenfeld runs Tuesday through Sunday in the Amaturo Theater at the Broward Center for the Performing Arts, 201 SW Fifth Ave., Fort Lauderdale.  The nine cast members (including Karen Karpman, Aron Gonshor and Michelle Heisler, shown in the photo) perform song-and-dance numbers that take the audience on a journey from turn-of-the-century Europe to New York in the 1930s.  Performed in a mixture of English and Yiddish (projected translations are shown during Yiddish portions of the show), Those Were the Days has performances at 3 p.m. Tuesday-Wednesday and Saturday-Sunday, 7:30 p.m. Wednesday-Thursday and Saturday.  Tickets are $34.50.  Call the box office at 954-462-0222 or visit the Broward Center web site.

The music-theater piece Falling Bodies: When Galileo Met Primo Levi has a blink-and-you'll-miss-it performance at 7:30 p.m. this Thursday only at the Jewish Museum of Florida, 301 Washington Ave., Miami Beach. Written by Jonathan Levi with music by Bruce Saylor, the Nine Circles Chamber Theatre production imagines a meeting between two persecuted Italian scientist-poets from different centuries:  Galileo Galilei and Primo Levi, the latter sent to Auschwitz during World War II.  Tickets are $20, and they include admission to the museum's exhibitions.  For information, call 305-672-5044, ext. 3175, or visit the Jewish Museum web site.