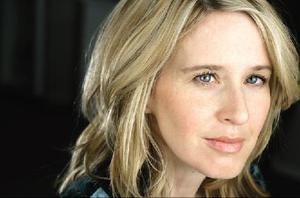 Plantation's Mosaic Theatre is producing Sarah Ruhl's Dead Man's Cell Phone as the third show of its current season, and the company has reached outside of South Florida for its star.  Normally, this is the kind of casting decision that creates turbulence in the region's acting pool (from which Mosaic customarily draws).  But this choice by director Richard Jay Simon makes sense:  Polly Noonan created the role of Jean in the world premiere production at Washington D.C.'s Woolly Mammoth Theatre in June 2007.

In fact, Ruhl told the Orange County Register's Paul Hodgins that she began thinking of Noonan in the role as she was writing the play:  "Polly...is a special case because I've worked with her about seven or eight times now, and have known her for over a decade...as I was about a third of the way in, I thought: "Ah! This is a role for Polly!' And I started hearing her voice in it as I finished the play."

So Noonan played Jean -- a young woman who answers a deceased patron's ringing cell phone in a cafe -- at Woolly Mammoth (earning a Helen Hayes Award nomination for her performance), then at Chicago's Steppenwolf Theatre. (Mary-Louise Parker did the role Off-Broadway.)  Noonan and the Mosaic cast will bring Dead Man's Cell Phone to life Feb. 26-March 22.  For information, call 954-577-8243 or visit Mosaic's web site.