« Divine decadence and lunch at the Caldwell | Main | Selling their Sol »

Over at Actors' Playhouse in Coral Gables at the moment, artistic director David Arisco is busy doing what he usually does:  rehearsing a large-scale musical (in this case Les Miserables, which opens March 6).  But once Les Miz is open and running, Arisco will get to work on a challenging, resonant play which may wind up featuring some faces well known to anyone addicted to Ugly Betty, Cold Case and several other current television shows. 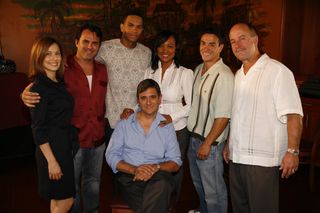 The play is Havana Bourgeois by actor-playwright Carlos Lacámara (seated in the photo, with the blue shirt, with the play's Los Angeles cast), set to run at Actors' Playhouse May 13-June 7.  Funny, observant and chilling, the play unfolds in a Havana advertising agency from 1958 to 1960, as Fidel Castro forever changed life outside the agency's walls.  As the agency's creative talents move from pushing gasoline and toothpaste to selling a revolution that has turned their lives upside down, unsettling individual dramas play out.

Lacámara got a well-received production of the play at a small L.A. theater in August 2007, but the upcoming Actors' Playhouse version has larger ambitions -- perhaps Broadway, eventually.  No actors have been signed yet, but rumor has it that former Miamians Danny Pino of Cold Case and Tony Plana of Ugly Betty are seriously interested; ditto film and TV actor Julio Mechoso, and one or two other names.

So, though we don't yet know who will wind up on the Actors' Playhouse stage, it's certain that Havana Bourgeois -- a play with meaning for so many in South Florida -- is coming.  For info, visit the theater's web site.