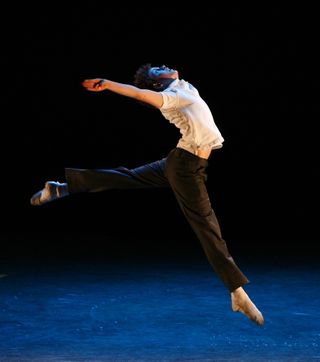 The most spectacular kid's part on Broadway at the moment is the title role in Billy Elliot the Musical.  The boy who plays young Billy, a kid from a British mining town who dreams of ballet stardom, has to dance (ballet, tap, street dancing), act (with an accent), sing and be able to handle gymnastics.  He is onstage for nearly all of the Elton John-Lee Hall show, performing six musical numbers.  Because of the role's demands, three different young dancer-actors play the role each week (Trent Kowalik, one of the Broadway Billys, is shown here in a photo by Carol Rosegg).

Because the show is a smash likely to run for a long time, its producers are in search of new Billys because, well, kids do grow.  Casting reps are coming to Orlando on Saturday, March 7, to hold auditions for boys ages 9 to 12 at the Orlando Ballet School's south location, 7600 Dr. Phillips Blvd., with sign-up beginning at 1:30 p.m.  The show is looking to cast boys in the starring role and the part of Billy's friend Michael.

The basic requirements are that the auditioner be a strong dancer who can sing, no taller than 4'10", no broken voices.  Each Billy hopeful should bring a recent photo, sneakers (plus tap and ballet shoes if possible), drinks, a snack and comfortable clothes (no leotards/tights).  The kids will learn the audition piece and need to be able to stay all day if necessary.

Think this might match up with the talents of a kid you know? Visit the Be Billy web site for more information.