Showtunes get a folksy spin 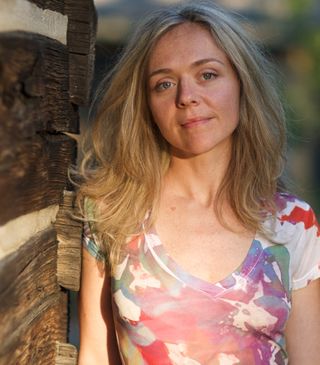 Like the Carbonell Awards voters who have honored Rachel Jones with three awards (and four additional nominations), I have always loved hearing this talented actress sing.  The first time I remember seeing her, she was in a wondrous production of Jacques Brel Is Alive and Well and Living in Paris with her parents, actors Mona and Dennis Jones.  She was a teen then, but her clear voice was already beautifully distinctive.

Jones has chalked up numerous theatrical achievements in the ensuing years, both in her native South Florida and elsewhere: doing Rent in Berlin, appearing on Broadway in Meet Me in St. Louis and The Boys from Syracuse, playing Hodel to Theodore Bikel's Tevye in a touring Fiddler on the Roof, starring as Anna opposite Lou Diamond Phillips in The Kind and I in Dallas, playing the title role in Evita (in English and Spanish) at Actors' Playhouse in Coral Gables.  Her most recent South Florida gig was in Actors' production of Urinetown last season, a performance that won her another Carbonell.

Now, under the name Rachel Bay Jones, the actress turns to a reinterpretation of theater songs on her debut solo CD ShowFolk.  Working with producer David Truskinoff, guitarist Bobby Baxmeyer, fiddle player Sam Bardfeld and other folk/bluegrass pros, Jones puts a folk spin on 11 songs from Broadway shows, some obvious candidates for that treatment, some not.  You'll hear Breeze Off the River from The Full Monty (my favorite cut); Little Bird, Little Bird from Man of La Mancha; Lucky To Be Me from On the Town; Stars and the Moon from Songs for a New World; The Streets of Dublin from A Man of No Importance by Stephen Flaherty (who calls her performance of the song "a revelation"); Left Behind from Spring Awakening; For Good from Wicked; Gonna Build a Mountain from Stop the World -- I Want To Get Off; Where, Oh Where (Is My Baby Darlin'?) from The Robber Bridegroom; Wicked Little Town from Hedwig and the Angry Inch, and a haunting Another Day from Rent.

You can sample the CD on Jones' website, at CD Baby or iTunes.  South Florida fans of Jones' theater work -- and anyone who loves pure, folk-flavored singing -- should enjoy listening.