« Selling their Sol | Main | Showtunes get a folksy spin » 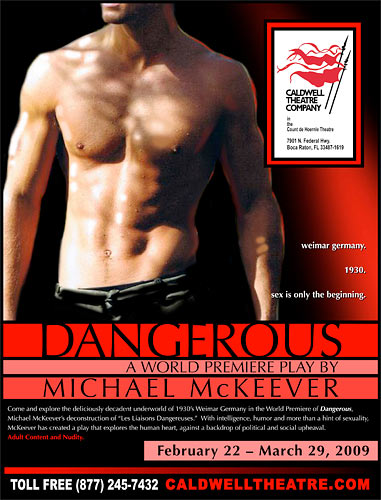 Though the folks at Boca Raton's Caldwell Theatre Company are busy prepping for Friday's official opening of Michael McKeever's new play Dangerous (and, checking out the show's poster, who can blame them for staying focused on this world premiere riff on Les Liaison Dangereuses?), the company's February/March newsletter lifts the lid on what may be its 2009-2010 season lineup.

The qualifier is that all plays are still "in negotiation," and things do change as hot titles become available.  But here's what artistic director Michael Hall has in mind for next season.

He plans to begin with David Mamet's adaptation of Harley Granville-Barker's The Voysey Inheritance, about a family whose skimming of money from its clients is scandalously revealed. Hmmm. The play will run Nov. 8-Dec. 13.  Next is Lauren Wilson's Chemical Imbalance: A Jekyll and Hyde Play (Jan. 3-Feb. 7, 2010).  Matthew Lopez's drama The Whipping Man, about a Jewish Confederate soldier confronted by two former slaves, is scheduled Feb. 21-March 28.  And Donald Margulies' Collected Stories, about a famous writer and her protege, is to close next season April 11-May 16, 2010.