A grand playwright travels on 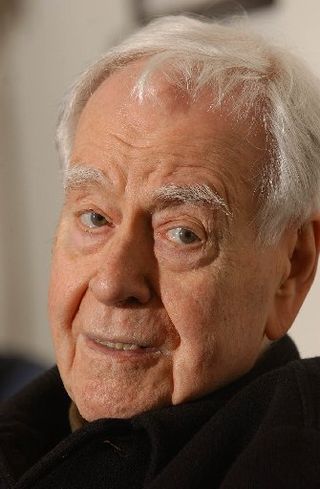 Horton Foote died in Hartford, Conn., on Wednesday, the week before he would have celebrated his 93rd birthday.  The snowy-haired, charming former Texan was in New England working with Hartford Stage artistic director Michael Wilson on plans for the theater's fall presentation of Foote's Orphan's Home Cycle, a group of nine plays by a prolific man who wrote more than 50 in his long career.  Even sooner, in late May, Hartford Stagewill present Foote's most recent Broadway play, Dividing the Estate. That production will feature his actress-daughter Hallie, a frequent, artful interpreter of her father's work.

Born in 1916 in the little Texas town of Wharton, Foote tried to break into theater as an actor but began writing in 1940 at the suggestion of choreographer Agnes de Mille, who thought one of his acting improvisations might make a good play.  Writing for theater, television and the movies, He earned two Oscars (for his To Kill a Mockingbird and Tender Mercies screenplays) and, at the tender age of 79, the 1995 Pulitzer Prize for his play The Young Man from Atlanta.

Foote, whose writing was likened to Anton Chekhov's by some of the artists who worked with him, wrote about spirited, ordinary men and women who persevered through life's difficulties.  About the man whose work he often directed, Wilson said to the Associated Press:  "He created so many unforgettable characters in so many indelible stories...that lifted our hearts and souls and gave such vivid expression as to what it means to be human."

I had the pleasure of lunching with Foote once nearly 10 years ago, when he was in town for the Miami Book Fair International.  We dined with Stephanie Norman and Susi Westfall of City Theatre, which was presenting Foote's lecture, but there wasn't any story to be written that day.  Just the joy of listening to a captivating, observant writer talk about theater and life, both of which he had so gracefully mastered.

That Foote will write no more is something to be mourned.  But his distinctive voice lives on in the sizable, celebrated body of work that is his legacy.