« See Mickey, be Billy? | Main | A grand playwright travels on »

Michael Hall to exit the Caldwell 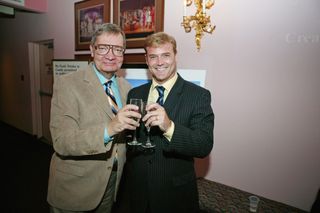 It's the end of an era for Boca Raton's Caldwell Theatre Company.  Oh, the shows will go on in the 333-seat, $10 million Count de Hoernle Theatre, the theater's fourth home since its founding in 1975.  But they'll do so without co-founder Michael Hall's artistic leadership.  On Tuesday, Hall announced that he'll retire on May 31.

Hall, who will celebrate his 69th birthday May 16, says he plans to "write a book, travel the world and become a better photographer." (He is, in fact, quite a good one.)  He'll also direct now and then.

Hall's successor has already been named:  The theater's board chairman for the past four years, Clive Cholerton, takes over the artistic director job June 1.  Cholerton, a 43-year-old director and actor, staged the theater's current world premiere production of Michael McKeever's Dangerous, a sexy set-in-1930-Berlin riff on Les Liaisons Dangereuses.  He is married to actress Margery Lowe, and the two have a young son.

Hall's comment on Cholerton:  "It is an artistic transition made in heaven.  As a director, Cholerton shares the theater's mission that variety in play selection is essential, and that ensemble work is the major goal of productions.  As someone to run the theater, he's been completely involved in fundraising, negotiating with builders and contractors for the Caldwell's new Count de Hoernle Theatre, and running the theater's Play Reading Series."

Hall, the longest-serving artistic director in South Florida theater, co-founded the Caldwell with Frank Bennett, the theater's longtime set designer, who died in 1997.  During Hall's long tenure, the Caldwell collected 73 regional Carbonell Awards (and counting) for excellence.  Artistically, Hall was drawn to often lavishly designed productions of new plays, period pieces and classics.  Among his many highs: productions of Sarah Ruhl's The Clean House, Moises Kaufman's The Laramie Project and Gross Indecency: The Three Trials of Oscar Wilde, John Patrick Shanley's Doubt. The director's lowest moment came in 1999, when he and the theater reached an out-of-court settlement with Tony Award-winning director Joe Mantello, who charged Hall had virtually replicated his original direction of Terrence McNally's Love! Valour! Compassion!.  Mantello donated the approximately $7.000 he was paid to his union, the Society of Stage Directors and Choreographers.

As he took the Caldwell from its first home at the College of Boca Raton (where the theater opened with a production of Neil Simon's The Star-Spangled Girl)  to two subsequent spaces in strip malls to its current free-standing theater on Federal Highway, Hall did work that entertained and moved hundreds of thousands of South Floridians.  He also made the Caldwell a first-rate place to work for such fine actors as Pat Nesbit, Terry Hardcastle, Peter Haig, Marc Kudisch (the Broadway musical star earned his Equity card at the Caldwell), Len Cariou, Barbara Bradshaw, John Felix and many more.

So the Caldwell will continue, doubtless evolving according Cholerton's vision.  But there probably won't be many dry eyes in the house when Hall mingles with the crowd at the April 17 opening of the musical Something's Afoot, the next -- and last -- show of an artistic director's very long run.