Playing to the crowd

Most theater has a target audience, broad as that group may be.  Actors' Playhouse in Coral Gables is doing its terrific current production of Les Misérables for folks who love Broadway megamusicals.  The Gables' intimate New Theatre is presenting an admirable revival of Tennessee Williams' The Glass Menagerie for fans of great American stage classics.  In April, the Broward Center for the Performing Arts plays host to Jersey Boys, the Tony Award-winning Broadway smash that's pretty much guaranteed to thrill two groups: fans of Rock and Roll Hall of Fame members Frankie Valli and the Four Seasons, and those who think jukebox musicals are way better than shows with songs you don't instantly recognize. 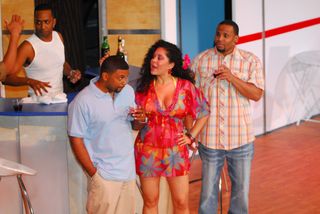 Sometimes, theater aims for a more specific target audience -- not in size, maybe, but in affinity.  The "urban theater" genre that helped make Tyler Perry famous works according to its own rules: cast stars with TV, music and movie experience; tell stories that deal with relationships, social problems and the power of religion; add music, some flashy production elements and sell lots of tickets.  It's not the kind of theater that wins Tony Awards or Pulitzer Prizes, but its audiences love it.

Playwright-producer Je'caryous Johnson has made millions working the urban formula, and his 10th venture arrives Friday, March 20, at Miami's James L. Knight Center for a three-performance run.  Love Overboard, described as "The Love Boat" meets "Sex and the City,"boasts a ship full of names that its certain-to-be-huge audiences will recognize: Avant, Khalil Kain, Carl Payne, Karen Malina White, KeKe Wyatt and Miguel A. Núñez Jr. Johnson's ship sails at 8 p.m. March 20, 3 and 8 p.m. March 21 at the Knight Center, 400 SE Second Ave.  Tickets are $37.50-$45.50, available by calling 1-800-745-3000 or via the Ticketmaster web site.

The Broward Stage Door Theatre at 8036 W. Sample Rd. in Coral Springs has a target audience of its own:  retired folks who prefer musicals and comedies.  The theater has just revealed its two-stage, nine-show season lineup for 2009-2010, and it's dominated by vintage titles aimed at pleasing a crowd looking to be entertained, not enlightened.