« At Barry, Bridezillas attack | Main | At Actors' Playhouse, it's Pino sí, Plana no » 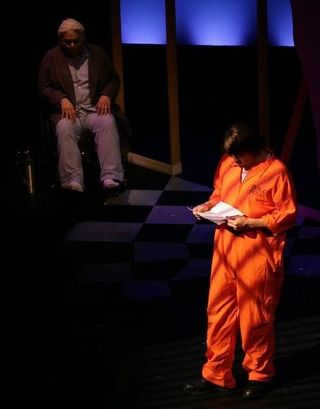 Playwright and actor David Nathie Barnes has been working on A Love Lost Life: The Unauthorized Story of Marlon Brando for several years now, launching it at the Orlando International Fringe Festival in 2007, expanding it for a run at West Palm Beach's Cuillo Centre.  Tonight, the expanded and revised play begins a four-performance run at Miami Beach's Colony Theater.

Barnes uses the Brando family story to focus on the complex relationship between fathers and sons. He presents the acting legend at different ages, from the young man who attracted the interest of Marilyn Monroe and James Dean (along with the rest of the world) to the elderly, ailing artist stricken by his son Christian's murder of  his pregnant sister Cheyenne's boyfriend.  Barnes plays Christian in A Love Lost Life, with Cliff Burgess as the young Brando.