A musical mystery as Hall leaves the Caldwell 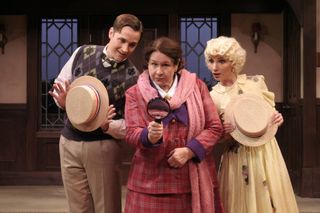 Michael Hall's final show in his 33-year run as artistic director of Boca Raton's Caldwell Theatre Company is, however it turns out, another example of the sort of theater he's staged so well through the years.

The musical Agatha Christie spoof Something's Afoot, which previews at 8 tonight and Thursday, then has its gala opening at 8 p.m. Friday (April 17), is a large-cast comedy-mystery about guest who arrive at an English country estate to find their host murdered and their lives in danger. Designer Tim Bennett, who makes a rare acting appearance in the show, has created a beautifully detailed manor house for the show.  It's the kind of set that the late Frank Bennett, who co-founded the Caldwell with Hall, designed often and so well.

Hall's swan song offers an additional bonus:  two kids from 10 to 17 can see the show for free when they go with an adult who buys a full-priced ticket at 8 p.m. Tuesday-Wednesday and 7 p.m. this Sunday and April 26.