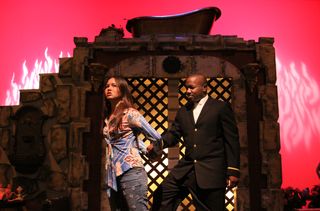 Charles L. Mee's Big Love, a fabulously inventive reworking of Aeschylus' The Suppliant Women, was the sensation of the Humana Festival of New American Plays in 2000, going on to a healthy life in major regional theaters around the United States (though not, alas, in South Florida, where theater companies seem allergic to anything even vaguely connected to Greek drama).

Barry University's Department of Fine Arts is filling in that gap with its production of Mee's play about 50 runaway brides who just say no to their arranged marriages.  Actually, that's putting it mildly:  Nearly all the brides murder their grooms rather than getting lovelessly hitched.