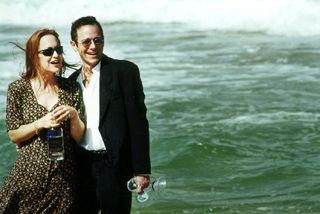 The 33rd annual Carbonell Awards were handed out Monday night in a moving, entertaining, raucous and altogether memorable ceremony in the Amaturo Theater at the Broward Center for the Performing Arts.  Countless talented South Florida theater folks were involved, but the mind and vision that shaped this year's show belong to Executive Producer/Director Amy London, who did a spectacular job.  (That's Amy at left with playwright/actor/Carbonell program designer Michael McKeever.)

London's Carbonells weren't as flashy as those in recent years.  No orchestra, no Vegas/cruise ship production numbers, no out-of-town "celebs" without connections to (or knowledge of) South Florida theater.  Instead, the show was by, of and for the region's theater artists.  And it was also both more meaningful and more memorable. Thanks to the magic of Power Point, when nominees in each category were announced, a production photo or picture of the artist at work reminded everyone of the richness of the talent that graced South Florida Stages in 2008.  Instead of random Broadway musical numbers, London's show featured a number from each of the productions vying for the best musical Carbonell.  After a terrifically witty opening number by Laura Hodos and Maribeth Graham (Carbonell-skewering lyrics set to the tune of Stephen Sondheim's Getting Married Today from Company) and the presentation of four design awards, the entire cast of GableStage's Adding Machine (except for Ken Clement, who didn't sing in the show) emerged to demonstrate why London's musical-highlighting notion was such a fine idea.

Oscar Cheda, Jim Ballard, Stacy Schwartz, Graham -- all of whom won Carbonells for their work in the show -- and the stellar "chorus" (Irene Adjan, Erik Fabregat, Lisa Manuli and Barry Tarallo) sang the heck out of one of the musical's devilishly complex numbers, as their Carbonell-winning musical director Erik Alsford accompanied them on the piano.  Later, director Joseph Adler and the show itself won Carbonells.  That musical moment was a vivid demonstration of how artistic risk can bring rewards and of how deep South Florida's talent pool has become. 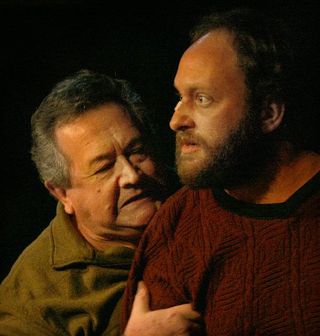 Because of the dominance of Adding Machine, GableStage had a great night. So did Mosaic Theatre, the company that American Heritage School grad Richard Jay Simon started at his Plantation alma mater and built, with amazing speed, into one of the region's powerhouse companies.  Mosaic's production of Conor McPherson's The Seafarer brought it multiple Carbonells, including best production of a play and best director for Simon.  Gregg Weiner (at right in photo with Seafarer cast mate and fellow nominee John Felix) was named best actor.  Dennis Creaghan, who beat out Felix for best supporting actor, acknowledged his cast mate by musing that maybe there should have been a recount, Felix hollered good-naturedly from the audience, "I want one."

Among the evening's other high points:  When Actors' Playhouse artistic director David Arisco received the George Abbott Award for Outstanding Achievement in the Arts, he actually spoke about the honor's legendary Broadway namesake, recalling how much it had meant to have Abbott in the audience at Actors' when he staged Damn Yankees (a show Abbott co-authored and directed on Broadway in the year Arisco was born).

Among low points:  award recipients who took advantage of London's decision not to put a time limit acceptance speeches by gushing and babbling endlessly; "artists" who seem unable to speak into a microphone without dropping f-bombs; one obviously alcohol-powered actor-director who kept yelling another director's name from the audience.  The Carbonells may have turned into a happy "theater prom" this year, but they're a celebration of a professional community, not a time-trip back to high school.

The theater community will, inevitably, do plenty of Tuesday-morning quarterbacking about who did/didn't win Carbonells.  But the show itself?  London did herself and South Florida theater proud.