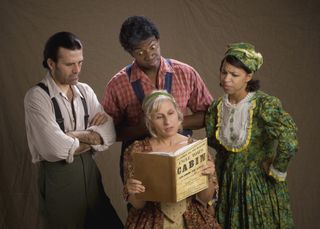 On the menu of shows opening all over South Florida this week, M Ensemble is serving up the stereotype-busting I Ain't Yo Uncle: The New Jack Revisionist Uncle Tom's Cabin.

Robert Alexander's biting satire is a confrontation between abolitionist author Harriet Beecher Stowe and some of her famous novel's characters, including Uncle Tom, Topsy and Eliza.  The charge:  Not only did Stowe offer up stereotypes, but she also failed to get the characters' story right.