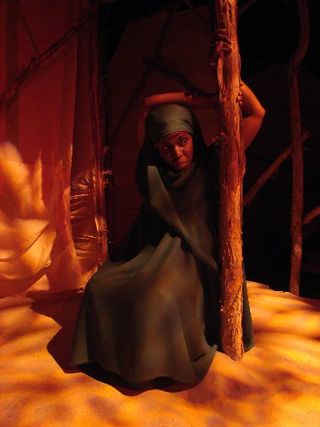 Playwright Winter Miller worked as the assistant to New York Times columnist Nicholas D. Kristof, traveling with him to the border of Sudan where the two interviewed survivors of the genocide in Darfur.  Kristof won a Pulitzer Prize for his commentary about the horrors of war in the region.  Miller turned her experiences into the intense play In Darfur, which begins performances at 8 tonight (April 16) at Plantation's Mosaic Theatre.

Miller's play follows the story of a survivor named Hawa, a new widow whose husband and children have been murdered by the Janjaweed.  She courageously speaks to a New York Times reporter about the atrocities she witnessed -- and the results are disastrous.

* Actors' Playhouse holds its 18th annual Reach for the Stars gala and auction at 6:30 p.m. Saturday, April 18.  Admission is $100 per person, and for that you get a gourmet dinner, open bar, entertainment, silent auction and a live auction.  Some of the big-ticket items include international business class airline tickets, jewelry, hotel packages, cruises -- well, you get the picture.  TV's Bob Soper oversees the fun, which happens at the theater, 280 Miracle Mile in Coral Gables.  Call 305-444-9293 or visit the theater's web site.

* Miami's own Pulitzer Prize-winning playwright, Nilo Cruz, will be developing a new play at the Eugene O'Neill Theater Center's National Playwrights Conference (NPC) this summer.  The Color of Desire, to be directed by NPC artistic director Wendy Goldberg, is set in 1960 Havana and focuses on an American businessman who hires a Cuban actress to play his lost love.  The play, which got an earlier reading at Florida Stage, gets staged readings in Connecticut on July 11-12.