"In the Heights" on TV and the road 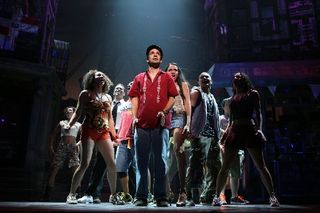 Just a quick late-afternoon heads up, in case the rainy day has you thinking TV tonight:  In the Heights creator and star Lin-Manuel Miranda (and his Tony Award-winning show) will be featured from 8 to 9 p.m. on PBS's Great Performances (Ch. 2 in South Florida).  Watch as Miranda talks about the evolution of a hit show that began as a college project at Wesleyan University.

In more Heights-related news, two South Florida actors have been cast in the show's touring company, which begins its journey around the country in Tampa in October.  Both Natalie Caruncho (who will understudy the young female leads) and Oscar Cheda (he'll fill in as the dad/car service owner and the piragua vendor) will be be part of a cast that will play Fort Lauderdale's Broward Center for the Performing Arts March 16-28, 2010.  The two will deepen South Florida's already strong connections to the show:  Musical director/arranger Alex Lacamoire won a Tony for his work on In the Heights, and former Miamians Janet Dacal, Andrea Burns, Carlos Gomez, Nina Lafarga, Tony Chiroldes, Joshua Henry and Afra Hines were all part of the original Broadway cast.