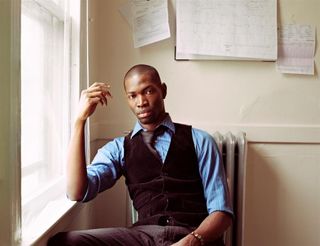 Tarell Alvin McCraney, whose grittily poetic plays are being produced on both sides of the Atlantic (though still not in his hometown of Miami), will receive yet another honor next week, adding to the many he has received since graduating from the Yale School of Drama in 2007.

On Wednesday, May 27, McCraney will receive the first New York Times Outstanding Playwright Award in a ceremony at the newspaper's Manhattan headquarters.  Honoring an American playwright who has made a recent professional debut in New York (McCraney was chosen for The Brothers Size at the Public Theater), the award was determined by a committee of three Times arts editors, Times contributor Sylviane Gold and four impressive playwrights: Edward Albee, Richard Greenberg, James Lapine and brand-new Pulitzer Prize winner Lynn Nottage.

It has been a good spring for the 28-year-old McCraney.  He's back from his part-time job as RSC/Warwick International Playwright in Residence for the Royal Shakespeare Company, was just profiled as part of the Advocate's Forty Under 40 rising stars in various fields, and his trilogy of "Brother/Sister" plays is running at the Tony Award-winning McCarter Theatre in Princeton, N.J., through June 21.

Now, if he could just catch a break in Miami.