I'm back from New York, apparently having brought the gray skies and rainy weather with me.  In a week, I saw seven Broadway plays and musicals, plus all three of Tarell Alvin McCraney's "Brother/Sister" plays at the McCarter Theatre in Princeton, N.J. -- a phenomenally moving experience, about which I'll be writing soon.  Broadway was busy: Loads of successful shows, though some of the struggling ones have hired unemployed actors to pass out discount coupons to the throngs of tourists coursing down Broadway and Seventh Avenue.  This is kind of genius, a grand step up from the guys who pass out fliers for bus tours of Manhattan:  The actors actually know something about the shows and can hold forth on Eugene O'Neill, Neil LaBute and so on.

Also while I was away, Havana Bourgeois opened at Actors' Playhouse, Dumb Show at The Promethean Theatre, El inconveniente at Teatro 8, and Yankee Tavern had its world premiere at Florida Stage.  I plan to catch up with the shows, but because we didn't want readers to wait, we picked up Bill Hirschman's Havana Bourgeois and Dumb Show reviews for the Sun-Sentinel and sent him to review Yankee Tavern for The Herald; Mia Leonin covered El inconveniente for us.  Just a little inside-baseball note on the Herald's continued commitment to theater coverage. 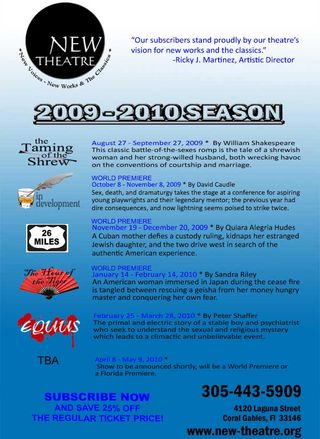 Also while I was away, New Theatre sent out an updated list of the shows for its 2009-2010 season.  New to the lineup is a production of Peter Shaffer's Equus, a play that was revived on Broadway this season with Daniel Radcliffe (of Harry Potter fame) making an impressive (if not Tony-nominated) New York stage debut.  New Theatre's Equus will run Feb. 25-March 28, 2010, following three world premieres.  For details, call 305-443-5909 or visit the theater's web site.

Two other theaters have free readings on the horizon.

Rising Action's Senior Readers Theatre is offering an evening of short plays and scenes on Friday at 8 p.m.  The theater is at 840 E. Oakland Park Blvd., Fort Lauderdale; call 954-561-2225 or visit the web site for information.