I'm in New York this week, seeing seven of the shows vying for various Tony Awards; taking the train out to the McCarter Theater in Princeton, N.J., to see Miami playwright Tarell McCraney's "Brother/Sister Plays" trilogy; doing various interviews (including chats with former South Floridian Marc Kudisch, Tony nominee for 9 to 5: The Musical, and Colombian hottie Sofia Vergara, soon to open in Miami in Chicago).  I'm alsoceleb-spotting:  In addition to the famous folks I'm watching onstage (Marcia Gay Harden, James Gandolfini, Jeff Daniels and Hope Davis, all Tony nominees for their work in Yasmina Reza's God of Carnage; a radiant if dance-challenged Allison Janney, another Tony contender, in 9 to 5), I saw former Alias star and Broadway veteran Victor Garber when I had dinner at Bond 45 last night. 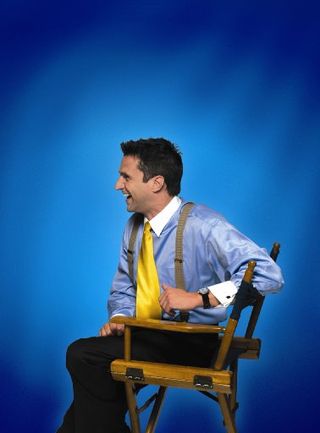 I also caught up with Raúl Esparza, the former Miamian who has become a Broadway star and frequent Tony nominee.  He's in contention again this year, this time for the leading actor in a play Tony for his searing performance in the now-closed revival of David Mamet's Speed-the-Plow.  And with that nomination, Esparzaties a record held by Boyd Gaines:  The two are the only actors to be nominated in every Tony category for which a male actor is eligible.  But Esparza did it faster.

Esparza and costar Elisabeth Moss (of TV's Mad Men) finished out the limited run, first opposite Norbert Leo Butz, then with Mamet veteran William H. Macy in Piven's role.  But Esparza got the stellar reviews and yet another Tony nomination.  He's not expecting to win -- he thinks the voters will go for Geoffrey Rush in Exit the King -- though of course he'd love to hear his name called when the winner is announced at Radio City Music Hall June 7.  He's already in rehearsals for his next show, the production of William Shakespeare's Twelfth Night at Central Park 's Delacorte Theater June 10-July 12 (he'll play Orsino to Anne Hathaway's Viola).

But no matter how it goes at this year's Tony ceremony, the versatile Esparza has every reason to savor his record-tying nomination.