Jennifer Vellenga, an assistant professor of theater at the University of Miami, has launched a new company -- the Ibis Theatre Project -- with several colleagues who (like Vellenga) have extensive experience working in America's top regional theaters.  Their first project:  a production of Chantal Bilodeau's new play The Motherline, which is described this way:

"The Motherline is a lesson in the roots of love.  Claire, an unborn soul, has chosen her mother, but her mother isn't getting pregnant anytime soon.  Will exchanging lives with her mother's Buddhist cat get Claire close enough to win the love she desires?"

Ibis is taking The Motherlineto the New York Fringe Festival in August.  But first, the play gets four public performances this weekend at UM's Jerry Herman Ring Theatre.  Shows are at 8 p.m. Friday-Saturday, 2 p.m. Saturday-Sunday, and tickets are a mere $8.  For more information, visit the Ibis web site 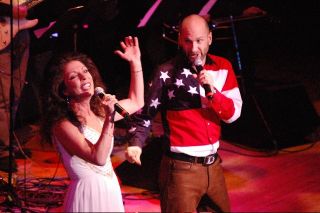 .More good news for a University of Miami educator.  Jo Lynn Burks, musical director and teacher of voice for UM's Frost School of Music, won the award for Best Revue or Special Material at the annual Manhattan Association of Cabarets (MAC) Awards last month.  Burks and performing partner Daryl Glenn earlier won both the Nightlife Award and the Back Stage Bistro Award for Nashville, a show inspired by Robert Altman's movie.