« A musical with bite | Main | World premieres and a marriage musical »

It's the Toners, bro 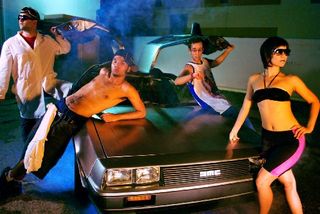 I felt like a spy from Babyboomerland when I went to the Toners in Time show in Coral Gables on Sunday.  The creation of playwrights Marco Ramirez, Lucas Leyva and Alex Fumero  (the guys behind the new Foryoucansee Theater company),  Toners in Time was a brash creative attempt to get the club crowd to try theater.  It worked, and not just because the tickets were only $10 each.

Thanks to a combination of funny writing and acting, booming faux reggaeton, multimedia daring, and a free-flowing combo of Caldas rum and Jupiña (probably the audience's favorite sponsors), the 100 people crammed into New Theatre's too-tight-for-the-Toners quarters realized that original, Miami-centric theater can be fun.

The Miami references, everything from Turkey Point to Sunset Place to the Youth Fair, flew as fast as that Back to the Future Delorean (though the one parked outside the theater Sunday night set off the smoke alarm -- don't ask).  The script was basically in English, but if you knew Spanish and/or Spanglish, you got way more of the jokes. The acting -- by Fumero as nerdish Che-Frio, Danny Monsalve as reggaeton dreamer Tito, Giordan Diaz as skinny reggaeton heavyweight Flipi, Cristi Garcia as the has-groupie-tendencies Anisette, and Erik Fabregat as a record mogul-wannabe and a Walter Mercado doppelganger -- was the bomb.  Particularly cool was the way Foryoucansee used multimedia:  Fabregat's parts were on video (the actor himself was in the audience), and the live performers interacted with his image.

Among the lessons learned:  Don't do an original show for just three performances in a 100-seat venue.  Tighten up transitions between scenes.  Don't start serving the Caldas and Jupiña too early if you want the audience to pay attention.  And if you want anyone older than 29 in the audience, stick a little guide to the script's place-and-pop-culture references in the program.

Next episode in the Toners Live!saga goes up in August, probably Aug. 21-23, though not at New Theatre, which will be in rehearsals for The Taming of the Shrew then.  Keep checking the Foryoucansee web site for info on exactly when/where you can catch Back to Bassics, which looks to have some sort of Star Wars vibe to it.