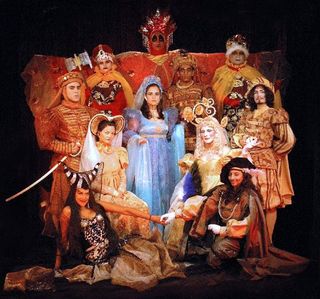 The 24th edition of Miami's International Hispanic Theatre Festival gets under way on Wednesday, July 8, bringing with it the opportunity to savor lots of Spanish-language plays over a short time period.  Though some of the festival's plays will have English supertitles to help not-so-fluent theatergoers follow along, and one (Oliver Mayer's Dias y flores, by the Los Angeles-based Company of Angels Theatre) will be performed in English, most shows will demonstrate the art of acting in Spanish.

For a number of the actors in Prometeo Theatre's Otelo -- Raquel Carrió's adaptation of William Shakespeare's Othello-- their festival performances July 9-12 mark a milestone.  The 11 students in the first class to complete Prometeo's one-of-a-kind, two-year professional conservatory program have completed their coursework and are ready to enter the larger world -- of theater, television and movies -- of Spanish-language arts and entertainment.

With those 11 actors moving on, Prometeo's director Joann Maria Yarrow is looking to fill five remaining slots for the new group of students entering the program in the fall.  The last round of auditions is July 20.  Information and application forms are on the Prometeo web site.