Meltzer out as City's Shorts streamlines 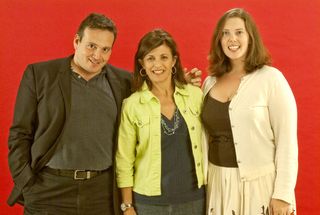 Stuart Meltzer just wrapped up his second season as the artistic director of City Theatre, the company that presents the popular annual Summer Shorts festival at Miami's Adrienne Arsht Center for the Performing Arts and the Broward Center.  As he found out after he went to work on Wednesday, that second season will be his last:  He was let go by Stephanie Norman (City's executive director and one of the company's three founders) and Alan Fein (board chairman and spouse of Susan Westfall, another City founder who also sits on the board).

Norman (she's in the middle in the photo, with Meltzer to the left and general manager Kerry Shiller to the right) explains that the company has a $50,000 deficit, a burden made worse by shortfalls in projected ticket sales in both Miami-Dade and Broward.  Worst hit during the recently ended 14th annual Shorts Fest was the Shorts 4 Kids program, which drew 76 percent of capacity last summer but fell below 30 percent this year -- probably, Norman guesses, because recession-related cutbacks brought far fewer school and camp groups to the theater.

Looking at the deficit, disappointing ticket sales and fundraising challenges, and anticipating a loss of $15,000 to $20,000 in grant money for next season, Norman, Fein and the board weighed numerous options and made the choice to go back to a seasonal festival coordinator rather than a year-round artistic director.

"The reviews and response from the audience were strong [this year],'' Norman says, "but we didn't hit our numbers."

So one major savings, it seems, will be Meltzer's salary.  The South Florida native, former head of theater at Gulliver Prep and a former full-time faculty member at the New World School of the Arts, was shaken by the news of his sudden unemployment but has chosen to take the high road.

"The board hired a young, energetic, creative person who was going to shake things up, and I tried to do that.  City Theatre has a terrific board in both Miami-Dade and Broward -- they care a lot,"  he says.  It's just bad luck that the economy is what it is."

Fein says that founders Norman, Westfall and Elena Wohl "did a great job taking the organization to the next level and the next.  After the 10th year, we asked whether we should just declare victory and wrap it up."  Because of support from the Miami-Dade County Department of Cultural Affairs, Carnival Cruise Lines, the Arsht Center and numerous other companies, foundations, individual donors and government grants -- and because of the festival's popularity -- it stuck around and kept growing until the economy shriveled. Fein says that he's determined to make sure the 15th Summer Shorts starts $50,000 in the black and is hoping the company's artistic process "gets more collaborative again."

Norman says of Meltzer, "He's a charming, bright, articulate, wonderfully creative soul.  Working with him has been a pleasure.  I like him very much personally...Do we agree on everything?  No. When you put on art, disagreement is just human nature.  This model didn't work.  For better or worse, it has to change."