« Interview leads to a play | Main | More daring at the Caldwell »

The 24th International Hispanic Theatre Festival continues through July 26, bringing with it many fine Spanish-language theater experiences.  But if you're looking for even more theater en español, you're in luck. 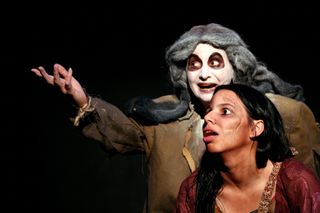 Joining those shows this weekend is Ernesto Garcia's El celador del desierto (The Guardian of the Desert), a 1996 play being produced to mark the second anniversary of Teatro en Miami Studio.

Sandra Garcia is the Keeper of  Secrets, Anniamary Martinez a young woman whose meeting with the Keeper leads to her destiny in this metaphoric play about humans living 2000 years after a nuclear holocaust.  The play is performed in Spanish but, as with Tu ternura Molotov, the dialog is accompanied by English subtitles.

Hasta luego:  I'm off on vacation until August 5, so Drama Queen will return when I do.