« Acting in Spanish | Main | Fresh theater at a bargain price » 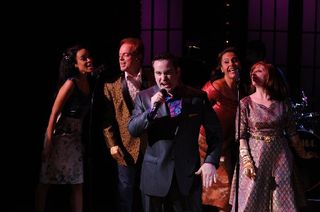 On Friday evening, I drove up to Manalapan (a ritzy oceanside community south of Lake Worth in Palm Beach County) for the world premiere of Some Kind of Wonderful! at Florida Stage.  It was opening night, and (as with Actors' Playhouse in Coral Gables) the Florida Stage folks like to make sure that special audience (which includes subscribers, board members, donors, theater staffers, actors' family members and, yes, critics) walks into the theater happy.

So there's food before (at Actors' it's after), dessert after the show and, most importantly, free wine and/or special cocktails right up to showtime.  Now, if you've ever been a guest at an event, a wedding or a party with an open bar, you know that for many people, restraint isn't part of the experience. "Free" seems to be an irresistible magic word.

Now, I enjoyed Some Kind of Wonderful! -- just check out my review.  But if you were part of that opening night audience and listened to the crowd's reaction, you might have thought you were watching Phantom of the Opera, Mamma Mia! and Wicked, all rolled into one.  They hooted! They hollered!  They gave it their best woo-woo!  And many of them were at least partially plastered, or on the way there.

I don't begrudge anyone a good time.  But alcohol does tend to make inhibitions (not to mention sober reflection) melt away.  Hence the bellowing glee from some theater staffers and friends of the cast (and band) who were seated in the audience.

How do I know that some of the mad cheering wasn't coming from regular ticket buyers?  One example: Several people seated near the back of the theater to the right were giving loud props to the bass player -- by name -- and that's not something that your average audience member does.  Too hard to look up the name in the program in the dark.

Another example:  The staging for The Lion Sleeps Tonight involved inflatable palm trees, flashlights and a small toy lion.  Cheesy in the extreme.  But from the reaction -- the far-from-sober reaction -- you might think you were watching Elphaba levitate as she sings Defying Gravity.

Turning opening night into one long party isn't unusual.  Florida Stage does it, Actors' Playhouse does, so does Miami's Mad Cat.  But if you've ever wondered why reviews of an opening night show aren't always as wildly enthusiastic as the partisan, partying crowd reaction would lead you to expect, now you know.