World premieres and a marriage musical

Further putting the lie to the idea that summer is a dead zone for South Florida theater, the next two weeks bring a pair of world premieres, plus a peppy musical revue about the pleasures and travails of marriage. 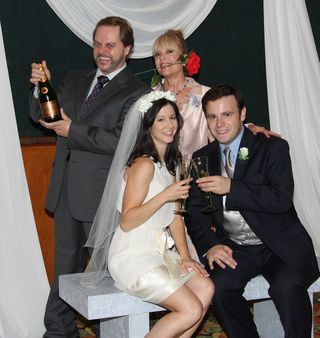 In Coral Gables, Actors' Playhouse is offering a bit of resonant escapism in its upstairs Balcony Theatre. Married Alive!, which previews July 8-9 and opens July 10 for a run through Aug. 16, follows a pair of newlyweds and a long-married couple as they deal with the stresses and joys of life, including little ones who then grow up and fly away. Carbonell Award winner Gary Marachek, Marcia McClain, Julie Kleiner and Jason Parrish are the show's stars.   Performances are 8 p.m. Wednesday-Saturday (Thursday-Saturday beginning July 30), 2 p.m. Sunday (additional matinees 2 p.m. July 15 and July 22).   Tickets are $48 Friday-Saturday, $40 other shows, $35 for previews (student and senior discounts except Saturday-Sunday). The theater is at 280 Miracle Mile in Coral Gables. Call 305-444-9293 or visit the Actors' web site.

Broward Stage Door Theatre had planned to begin a long run of Tony Finstrom's world premiere comedy Knish Alley!on July 10, but a cast change has now pushed back the opening to July 17.  The play follows the journey of a troupe of poor Yiddish actors traveling from England to the United States at the turn of the 20th century, as the performers do menial jobs by day and put on operettas at night.  Steven Chambers, Todd Bruno, Miki Edelman, David Hemphill, Kally Khourshid, Jaime Libbert and Kevin Reilly star in a play Finstrom describes as "...a fond look back at the way things were...and might have been, on board a ship bound for a new land, a new language and the promise of a new beginning."  Performances of Knish Alley!, which runs through Aug. 30, are at 8 p.m. Friday-Saturday, 2 p.m. Wednesday and Saturday-Sunday.  Tickets are $33.25. The theater is at 8036 W. Sample Rd., Coral Springs. Call 954-344-7765 or visit the Stage Door's web site. 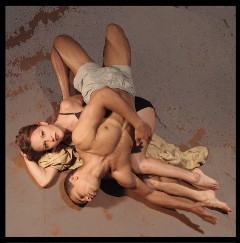 Clive Cholerton begins his run as the second-ever artistic director at Boca Raton's Caldwell Theatre Company with the world premiere of Vices: A Love Story.  Created by Ilene Reid, Michael Heitzman, Everett Bradley and Susan Draus, the musical explores relationships through song and dance (and, apparently, not too many costumes).  A.C. Ciulla, who got a Tony Award nomination for his work on Footloose, is doing the choreography.  Cholerton's comment on the show:  "The story is contemporary and involves individuals in their 20s and 30s.  The music is sophisticated while remaining accessible.  Above all, the show manipulates a fine line between heartfelt human emotion and outlandish comedy."  Vices previews July 8-9, opens July 10 and runs through Aug. 2.  Performances are 8 p.m. Wednesday-Saturday, 2 p.m. Wednesday and Saturday-Sunday.  Tickets are $38-$47.50.  The Caldwell is at 7901 N. Federal Hwy. in Boca Raton.  Call 1-877-245-7432 or visit the theater's web site.