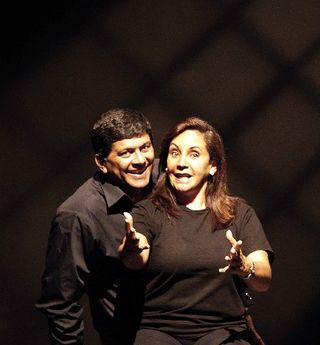 Area Stage, the pioneering Lincoln Road theater company that has found new life at the Riviera Theater in Coral Gables, is opening its second play in a row by Venezuelan Gustavo Ott this weekend. Ott's Pony, a dark comedy about personal and political fraud, is directed by Area's John Rodaz, and it stars Venezuelan actors Flor Núñez and Franklin Virguez.

As it did with Ott's Tu ternura Molotov (Molotov Kisses), Area will present this co-production of Pony in Spanish with English supertitles (later in the run, Area did an English-language version of the play).  The Spanish-with-supertitles presentation is also the plan for the following two offerings, Enrique Rodriguez Maribal's La ultima cena  (The Last Supper)with Marta Velasco and Zully Montero (in October-November), and Christian Velencia's musical Amante a la antigua (In Love With the Past) with Lena Burke and Felipe Viel (December-January).

For the latter part of Area's season, Rodaz shifts to doing plays in both languages.  Arthur Kopit's Road to Nirvana (February-March) and Terrence McNally's The Lisbon Traviata (April-May) are plays Rodaz staged at the first Area location.  Now, he'll do both shows in Spanish and in English, a choice that makes Area's audience reach even larger.