Blasting into the new season at GableStage

Joseph Adler is in the thick of rehearsals for his end-of-summer production of David Mamet's Speed-the-Plow, a scorcher of a play about the movie industry.  It opens Aug. 15 at GableStage, with Carbonell Award winners Paul Tei and Gregg Weiner playing the battling movie execs, and Amy Elane Anderson as the wily temp who fuels a scathing dramatic smack down.  The play, which runs through Sept. 13, is likely to bring Adler's 2008-09 season to a combustible end. But it also sets the tone for the provocative artistic director's just-released 2009-10 lineup, which contains a sure-to-shock production of Sarah Kane's play Blasted. 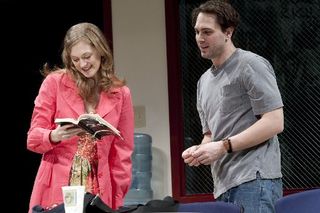 Adler kicks off his new season Oct. 24-Nov. 22 with Neil LaBute's recent Tony Award-nominated Broadway play Reasons To Be Pretty.  The play starts in the middle of a scorching fight between a woman and her soon-to-be-ex (Marin Ireland and Thomas Sadoski, pictured, played the battling lovers on Broadway).  Seems the boyfriend admitted to a coworker that his girl wasn't exactly a stunner, and coworker's wife ratted him out.  The GableStage production of one of LaBute's best scripts will will star Todd Allen Durkin, Ricky Waugh and Erin Joy Schmidt.

Beau Willimon's 2008 Off-Broadway play Farragut North is next, running Dec. 26-Jan. 24.  It focuses on dirty tricks and bad behavior during a presidential primary race, as an on-the-rise press secretary makes the unfortunate decision to sleep with a teenage campaign worker.

Kane's Blasted, which one British critic called a "disgusting feast of filth" when it premiered in 1995 in London, later came to be appreciated as an intense if tough-to-take first play by the brilliant young woman who committed suicide at 28. (Reason To Be Pretty's Ireland also starred in the play's long-delayed New York premiere at Soho Rep in 2008.)  Set in a hotel room during a war, Blasted includes scenes of rape, masturbation, brutality, cannibalism and more -- tougher, in other words, than Kane's searing 4.48 Psychosis, which was produced in South Florida to great acclaim by the Naked Stage. Blasted runs Feb. 20-March 21.

Avi Hoffman stars in The Quarrel,a play by David Brandes and Joseph Telushkin running April 17-May 16.  Based on a Yiddish story by Chaim Grade, the play focuses on two Holocaust survivors and friends, an Orthodox rabbi and a Jewish poet who has lost his faith.

Stephen Karam's Speech and Debate, an Off-Broadway comedy about three Oregon teens who meet after one of their teachers gets involved in a scandal, runs June 12-July 11.  And next season's summer closer (Aug. 7-Sept. 5, 2010) will be Michael Weller's Fifty Words, another recent Off-Broadway play about a couple exploring the love-hate truths of their marriage on their first night alone since becoming parents.

GableStage makes its home in Coral Gables' Biltmore Hotel, 1200 Anastasia Ave.  For information on Speed-the-Plow or the new season, call 305-445-1119 or visit the company's web site.