I came back to work from vacation last Wednesday, and since then, I've seen three plays.  One, the Women's Theatre Project's world premiere of Terry Lawrence's Speaking Elephant (an imaginatively lovely work about a pair of aging Asian elephants being moved from a zoo to an animal sanctuary), I saw and reviewed.  The other two -- Mad Cat Theatre Company's Viva Bourgeois! and the English-language version of Area Stage's Tu ternura Molotov (Molotov Kisses) -- opened while I was away.  And though the Herald had already published reviews of them (well, of Viva and the Spanish version of Molotov), I didn't want to miss them.

And I'm glad to report that my weekend was filled with the pleasure of watching some great performances. 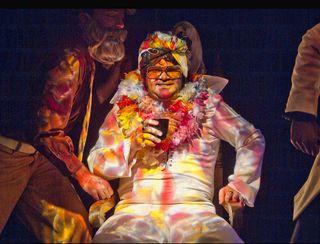 I would have hated to miss Erik Fabregat channeling a Vegas-era Elvis in Viva Bourgeois!, Mad Cat artistic director Paul Tei's adaptation of Moliere's 1670 script Le Bourgeois Gentilhomme (The Bourgeois Gentleman).  Though the entertaining production occasionally feels like a not-quite-finished melding of Moliere and Graceland circa 1971 (I think Tei could have gone farther in transforming the original), Fabregat gives the audience more Elvis than most accomplished Elvis impersonators.  Musically, vocally, physically, he's Elvis reincarnated, and hearing Moliere's words spoken by the King is something not to be missed.  Viva Bourgeois is at the Light Box, 3000 Biscayne Blvd., Miami, throughh Aug. 22.  Shows are 8 p.m. Thursday-Saturday; tickets are $30 Friday-Saturday, $25 Thursday ($10 for students).  Call 305-576-6377 or visit the Mad Cat web site before Elvis leaves the building. 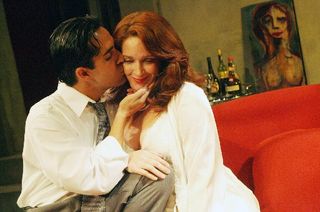 Sunday evening, I caught Molotov Kisses, the English-language version of Ott's Tu ternura Molotov (the translation is by Ott's wife, Heather McKay). Carlos Orizondo (who originated the role of Palomo in the world premiere of Nilo Cruz's Pulitzer Prize-winning Anna in the Tropics at New Theatre) and actor-jazz singer Ivette Viñas have been performing the two-character play in Spanish for weeks, and their beautifully burnished performances -- comic, intense, mysterious -- are among the finest you can find on a South Florida stage.

The family behind Area Stage (artistic director/designer John Rodaz, producer Maria Banda-Rodaz and their talented multitasking kids Rachel and Giancarlo) is doing work with the high artistic standards that were a hallmark of Area during its 10-year run on Lincoln Road.  Relocated to the Riviera Theatre, 1560 S. Dixie Hwy. in Coral Gables, Area is impressing Spanish- and English-speaking audiences all over again with Molotov Kisses.  The play ends its run on Sunday, Aug. 16.  Performances are 8:15 p.m. Saturday, 7 p.m. Sunday.  Tickets are $30 Saturday (or $50 for a pair), $25 Sunday ($40 for two).  Students get in for $10 when tickets remain.  Call 305-666-2078 or visit the web site for details.