More daring at the Caldwell 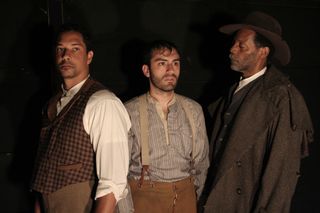 After beginning his tenure as the Caldwell Theatre Company's new artistic director with the smash hit world premiere of Vices: A Love Story, Clive Cholerton is hardly playing it safe or traditional with his second summer show. The Whipping Man, by playwright (and University of South Florida grad) Matthew Lopez, runs Aug. 12-30, and the explosive three-character play is -- again -- a departure from what the theater's core audience is used to seeing.

The Whipping Man, which had its world premiere in 2006 at Montclair, N.J.'s Luna Stage and another major production at St. Paul's Penumbra Theatre Company earlier this year, is set at the end of the Civil War as a wounded Jewish soldier struggles his way back to his family's ruined Virginia plantation just before Passover.  Two former slaves, men who embraced the family's faith, deal with wounds both physical and emotional as the three men grapple with issues of faith, slavery and betrayal.  Cholerton has cast Brandon Morris, Nick Duckart and Carbonell Award winner John Archie in the unsettling, provocative play.