At the risk of revealing a little too much about my psychological makeup, I have a confession:  I love the fourth wall. 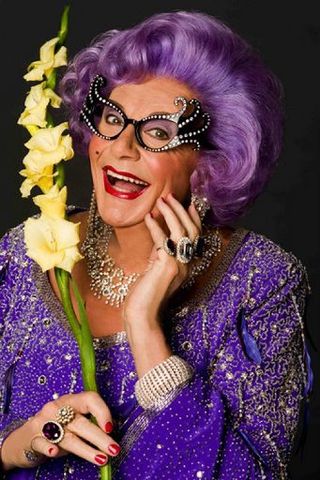 If you're reading a theater blog, you undoubtedly know that the fourth "wall" is that invisible divide between the actors onstage and those of us watching from the audience.  As the performers play out a story while pretending there aren't a few hundred (or a few thousand) people watching them, we might observe them silently or laugh or applaud, but we also respect the wall.

Except lately, not so much.  When you go to see a show by say, the incomparable Dame Edna, you go ready.  You know that if you snag a seat in the first few rows, your fate as "volunteer" (or victim) rests in the megastar's well-manicured hands.  For the great Dame, the fourth wall isn't just invisible:  It doesn't exist.  If you're not willing to be comically violated, it's best to sit with the "paupers" at the back of the theater.

Over the past 10 days at different South Florida theaters, however, that invisible fourth wall has seemed increasingly permeable.

At the Promethean Theater's Cannibal! The Musical Live On Stage, another critic found herself pressured to continue an actor's cowbell solo.  She politely nodded "no," so he dropped the cowbell into her lap.

When my hubby and I went to the Arsht Center to see The Harder They Come on Saturday, we shook hands and exchanged words with the actors playing Pedro the ganja guy and a Jamaican policeman.  The next day, a merry masked member of the Commedia dell'Arte-style Taming of the Shrew cast at New Theatre stopped by my aisle seat for a little interaction, bringing the spotlight and the crowd's attention with her.

OK, so these aren't the worst surprise interaction moments of my theater-going life (those would be when an actor at GableStage tossed a condom-covered banana into my lap and/or when Tony Danza knelt beside me at the Rainbow Room for a brief serenade).  But interactive theater, especially insistently interactive theater, makes me uncomfortable.

To reiterate: I love the fourth wall.  If I wanted to be in a show, I'd audition instead of buying a ticket.  Just sitting there in the dark, listening and reacting and thinking, is fine by me.  As Peter Sellers put it in Being There, "I like to watch."