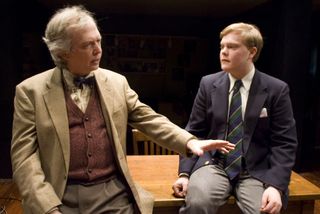 Alex Weisman is 22, finishing up his senior year in the theater program at Northwestern University outside Chicago. When he got cast in Alan Bennett's The History Boysat the TimeLine Theatre Company, he juggled performing with classwork -- for a much-extended, 25-week run, as it turns out.

On Monday, the multitasking paid off in an unexpected way for the actor who intends to stay in Chicago after he graduates.  He received the prestigious Joseph Jefferson Equity Award as best actor in a supporting role/play  for his performance as Posner. TimeLine's History Boyswon five Jeffs, more than any other production in theater-rich Chicago.

Weisman's mom Betsy, who works as accounting manager of the Broward Center's Broward Performing Arts foundation and who serves as a Carbonell Awards panelist here in South Florida, was in the audience with hubby David on Monday. On Wednesday, she was still bubbling and giddy as she noted that Alex will soon play the Ghost of Christmas Past in A Christmas Carol at Chicago's famed Goodman Theatre.  Since  graduating from the University School at Nova Southeastern University, she says, her son has been in 20 shows -- and counting.

(Photo of Donald Brearley as Hector and Alex Weisman as Posner by Lara Goetsch.)