The annual Carbonell Awards, coveted and often controversial, have honored South Florida's theater artists for more than three decades.  But tonight during the closing party of the South Florida Theatre Festival, the much younger Silver Palm Awards will recognize a variety of outstanding work done in the region between Sept. 1, 2008, and Aug. 31, 2009. 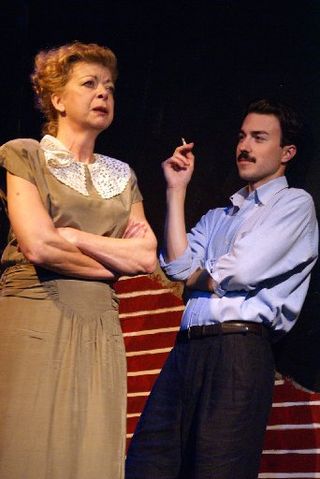 Receiving Silver Palms for performance are Angie Radosh(pictured, as Amanda Wingfield, with Cliff Burgess as Tom), for Speaking Elephantat the Women's Theatre Project and The Glass Menagerie at New Theatre; Israel Garcia, for Mauritius and The Taming of the Shrew, both at New Theatre; Barbara Bradshaw, for The Chairsat Palm Beach Dramaworks and Dead Man's Cell Phoneat Mosaic Theatre; John Archie, forRadio Golf at Mosaic and The Whipping Manat the Caldwell Theatre Company; Gregg Weiner, for Speed-the-Plowat GableStage, The Seafarer at Mosaic and Dumb Showat The Promethean Theatre Company.

Matthew William Chizever wins the Silver Palm as outstanding new talent for his work in Cannibal the Musical at Promethean and La Cage aux Folles at Broward Stage Door Theatre.  Barbara Stein is being honored for her producing work on 1776 and Les Miserables at Actors' Playhouse.  Clive Cholerton gets a Silver Palm for his direction of Vices: A Love Story and The Whipping Man at the Caldwell; Margaret Ledford for Cannibal the Musical, Dumb Show and The Banality of Love at Promethean; and Bill Castellino for Cagney and Some Kind of Wonderful at Florida Stage.  Castellino's collaborator, Christopher McGovern, is being honored for his outstanding musical direction of both shows.

The Silver Palms are also honoring GableStage artistic director Joseph Adler for his support of the theater community and his consistently outstanding work; stage manager Lara Kinzeland her crew for their work on Palm Beach Dramaworks' Private Lives; and both Becon Television and Florida Media News for their support of theater in the region.

Also at tonight's bash, Barry Steinman and Antonio Amadeo will receive the Theatre League's annual Remy Awards for their service to the league.

League members get in free, but anyone is welcome to attend the party at Revolution Live, 200 W. Broward Blvd., Fort Lauderdale.  Admission is $20, and the fun begins at 7:30 p.m.  E-mail andie@southfloridatheatre.com to make a reservation.