Ground Up tackles a chilling tale 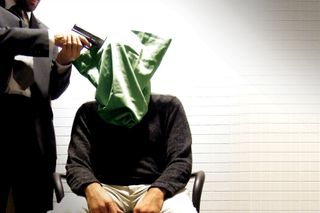 In case you were looking for some sort of Halloween weekend activity that's both scary and artistically captivating, Ground Up & Rising has just the play for you:  Martin McDonagh's The Pillowman.

GableStage artistic director Joseph Adler, who's been a supportive mentor to the Ground Up & Rising gang, did the first South Florida production of McDonagh's horrifying play about a writer who finds himself being questioned -- then tortured -- because of the similarities between his short stories and a series of child murders.  Adler's production in August 2006 won several Carbonell Awards, including the ones for best play, best director and best actor. But there's always room for different interpretations of a great script.

Ensemble members Carlos Alayeto, Arnaldo Carmouze, Reiss Gaspard, Jennifer Lorenzo and Bechir Sylvain are in the production, with Carmouze directing.  The only dispiriting news is that The Pillowman is being done for just four performances:  8 p.m. Oct. 30-31 and 3 p.m. Nov. 1 at ArtSouth Sanctuary Performing Arts Center, 250 N. Krome Ave. in Homestead; 9 p.m. Nov. 7 at the Byron Carlyle Theater, 500 71st St., Miami Beach, as part of the Sleepless Night festival.  Tickets to the ArtSouth run are $15 ($10 for seniors, students and military personnel); during Sleepless night, the show is free.  For more Ground Up & Rising info, call 305-529-6233 or visit the group's web site.

Ground Up & Rising is a collective of talented young theater artists hampered by their lack of an intimately sized ongoing performance location, too-short runs and problems in getting the word out about their shows.  Founder/artistic director Arturo Fernandez is aware of those issues and is working hard to resolve them.  But in the meantime, there is The Pillowman -- the kind of shocking, exciting theater that Ground Up & Rising is all about.