« 'Sunday in the Park' at the Caldwell | Main | At hour 21, excitement and exhaustion »

The clock is ticking 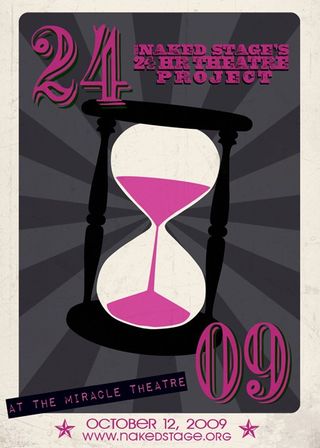 The playwrights finished, exhilarated and bleary-eyed, sometime in the wee hours this morning. Just a little over an hour ago, 31 actors, eight directors and 10 stage managers gathered for a first read-through of the hot-from-the-laptop plays that will occupy their efforts and imaginations during an intense 13-hour rehearsal period.  And at 8 tonight, the Naked Stage's third annual 24-Hour Theatre Project gets its one and only performance at Actors' Playhouse in Coral Gables.

If you have a ticket -- or still want to get one -- here's the rundown on what you'll be seeing.  All titles were chosen from a list devised by Katherine Amadeo, Naked Stage's artistic director, and Antonio Amadeo, the company's producer and 24-Hour's artistic director.

This year's 24-Hour Theatre Project is one of two kickoff events for the South Florida Theatre Festival (the other is Florida Stage's staged reading of The Laramie Project: Ten Years Later, also at 8 tonight, at the company's theater in Manalapan).  Ticket prices to the 24-Hour event have dropped to $25 (last year, they cost $58), and you can still get good seats by calling 305-444-9293 or visiting the Actors' Playhouse web site.  Or just show up at the Miracle Theatre, 280 Miracle Mile in Coral Gables, for a chance to savor the yearly miracle of almost-instant theater.