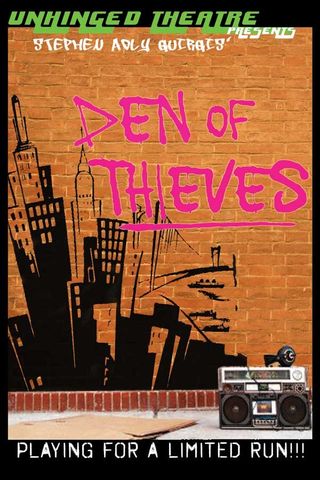 No, this isn't a post about a festival of short plays.  It's a collection of brief items about theater -- an edgy play, a benefit raffle, a rock musical premiere, enhanced Broadway touring performances -- from around South Florida.

*  Unhinged Theatre, a company of Florida International University theater grads and students, is putting on a brief run of Stephen Adly Guirgis' Den of Thieves.  Jose Grau directs Ashley Alvarez, Zunyer Garcia, Yesenia Iglesias, Michael Leon, Matthew Mur, Paul Perez and Ryan Rodriguez in a play about people who plot to steal $750,000 in drug money, only to find themselves in a life-and-death battle.

* This Friday, Plantation's Mosaic Theatre is partnering with its host institution, The American Heritage School, to raise funds for the ongoing medical treatment of teen burn victim Michael Brewer.  The theater and school are selling raffle tickets at $2 each or three for $5, and the prizes are 45 "gently used" eMac computers and 45 tickets to Mosaic shows.  Send a check made out to American Heritage School, with "Michael Brewer" on the memo line, to Mosaic Theatre, 12200 W. Broward Blvd., Suite 3121, Plantation, FL 33325 -- but remember, the drawing is this Friday.

*  In Broward Center news, 100 Years of Broadway composer Neil Berg is world premiering a new piece called The 12 on April 1, 2010, in the center's Au-Rene Theater.  Berg's rock-style score, set to a story by Pulitzer Prize winner Robert Schenkkan (The Kentucky Cycle), will be performed by Broadway/rock performers including Rob Evan, Danny Zolli, Lawrence Clayton and Patti Russo.  The show is described as "the musical that begins where Jesus Christ Superstar left off."  Tickets are $25-$55 and are on sale at the box office (954-462-0222) and on the Broward Center's web site (but you have to search for it by typing in The Twelve -- it doesn't show up if you try The 12 or Berg's name).

* Also at the Broward Center, the center has joined with Broadway Across America to offer both signed and open-captioned/audio-described performances of this season's touring Broadway shows.  Signed performances communicate dialogue, lyrics and sound effects to those who understand American Sign Language.  Audio-described narration allows visually impaired theatergoers to listen to descriptions of a show's visual elements on special head sets. Open captioning provides a text displayof dialogue and lyrics to the side of the stage.

The center's current show, Legally Blonde the Musical, will ahve a signed performance at 8 p.m. Nov. 20 and an open-captioned/audio-described performance at 2 p.m. Nov. 21.  Similar performances will take place during the runs of The Phantom of the Opera, The 39 Steps (at the Parker Playhouse), In the Heights and The Color Purple.  Get tickets to the special performances by calling the box office at 954-462-0222 or calling via TTY at 954-468-3283.