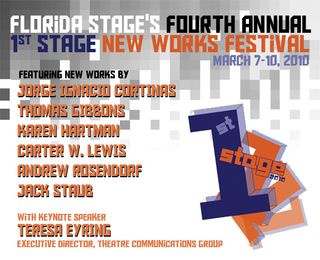 Florida Stage has always celebrated new work -- some of its seasons contain one world premiere after another -- but for the past three years, Louis Tyrrell and Nancy Barnett have given their audiences an extra helping of the new via the company's annual 1st Stage New Works Festival.

The company, which moves this summer from Manalapan to its new home in West Palm Beach's Kravis Center for the Performing Arts, has just announced the lineup for its fourth annual festival, a four-day collection of staged readings, panels, speeches and parties.

This year's fest runs March 7-10, and features readings of Plowing the Seaby Jorge Ignacio Cortiñas, Silverhill by Thomas Gibbons, Goldie, Max and Milk by Karen Hartman, The Cha-Cha of a Camel Spider by Carter W. Lewis, Wasteland by Andrew Rosendorf and Land's End by Jack Staub.

The keynote address, in the past delivered by prominent playwrights, will be given this year by Teresa Eyring, executive director of the Theatre Communications Group, a vital national organization of not-for-profit theaters.  And a special workshop dubbed Playwriting 101 will be taught by Lewis, whose The Storytelling Ability of a Boy winds up its world premiere run at Florida Stage on Sunday.

Details -- cost, exact schedule and so on -- are still to come, but tickets will go on sale Feb. 1.  For info, ,check the Florida Stage web site.