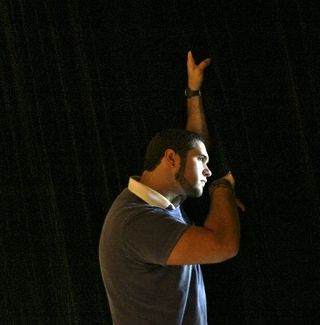 Marco Ramirez, the South Florida playwright whose very clear talent (and string of honors) got him into the highly competitive play-writing program at Manhattan's Juilliard School, has landed a gig writing for the FX television series Sons of Anarchy.  He has left New York for Los Angeles, and if the TV thing works out, who knows how much time/interest he'll have in continuing to write plays?

One Ramirez play that has already had a production by Miami's Mad Cat Theatre Company -- Broadsword, about guys in a heavy metal band who reunite when one of their own vanishes -- is coming back this spring, this time in a larger venue.  Mad Cat will revisit Broadswordin a coproduction with Miami's Adrienne Arsht Center for the Performing Arts.  The show plays the Carnival Studio Theater April 29-May 9.