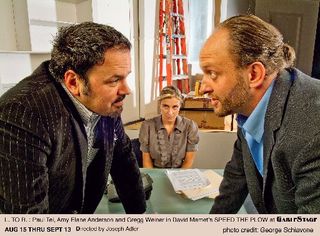 This morning brought news of the nominations for the 34th annual Carbonell Awards, South Florida's version of the Tonys or the Joseph Jefferson Awards or the Helen Hayes Awards or however you want to look at them -- though I think by now the Carbonells are as well-known nationally.  I say "news" because I'm not on the nominating/judging panel, so the long list of names was just as much of a surprise to me as to anyone who wasn't in the secret room last night where the tough decisions got made.

For a full list of those honored with nominations, check out my online story.

I'm posting a photo of Paul Tei and Gregg Weiner (and Amy Elane Anderson) in GableStage's Speed-the-Plow, because both guys have reason to smile today. Tei got nominated as best director for Broadsword at his own company, Mad Cat, and for his leading performance in Speed-the-Plow.  Weiner did even better: a best actor nod for Dumb Show at Promethean, two best supporting nominations for A Doll's Houseat Palm Beach Dramaworks and Farragut Northat GableStage, and a chance to share in a best ensemble win for Farragut North or Broadsword.  Wonder if Weiner, who played the devil in Broadsword, really does have magical powers....Just kidding, but I'm thinking he'll be buying a lot of drinks for his friends come April 12, which is when the winners will be revealed.

All in all, it's a pretty solid list of nominations, though I would have paid more attention to Rock 'n' Roll and Dead Man's Cell Phone at Mosaic, and might have pushed for The Glass Menagerie or Mauritiusat New Theatre.

Amy London will again direct the Carbonell Awards show, which happens at 7:30 p.m. April 12 in the Amaturo Theater at the Broward Center.  Tickets go on sale Friday and cost $25 ($20 each for groups of 10 or more).  Check it out (on Friday) at the Broward Center's site.