Those actors are real 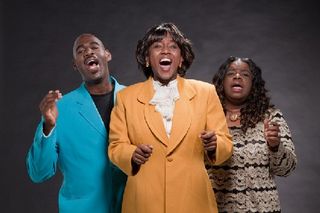 Here's another in a continuing -- and apparently endless -- series of complaints about audience behavior. Or why going to the theater is often not as fun/entertaining/transformative as it should be.

Last week a friend and I went to see Mahalia at M Ensemblein North Miami. I don't think much of Tom Stolz's lightweight script, but I have to say that the gospel performances by Johnny Sanders, Christina Alexander (as gospel queen Mahalia Jackson) and Francine Ealey Murphy are immensely enjoyable.  Or they would be, if people didn't behave as though they were at the movies and/or in their living rooms.

It's not the call-and-response interaction that's bothersome; that church-style engagement is intended and appropriate for Mahalia. What bugged, at least on opening night, were the woman who kept right on talking at full volume as the cast began to sing; the young woman who got up to answer her cell phone, and exited (walking right past the actors) to keep yakking in the lobby (at least she left); the young man who did the same; the lady, right across the aisle, who started playing a game on her phone when she got bored.  Not to mention the people who came back from intermission late, and walked right past the actors in the other direction to go back to their seats.  By comparison, a pair of toddlers in the audience were absolute angels.

Yes, it's a different world today.  We all have phones/internet so we can be reached 24/7, because heaven help us if we're out of touch for more than a minute.  But theater isn't a sporting event, a concert, a movie.  It's actors and their fellow artists trying to transport us into their world.

At the risk of sounding like a cranky snoot (OK, I'll take that), this is theater, people. Those are real, live performers up there, trying to create a specific world that doesn't involve you walking out with your cell phone screen glowing.  Show some respect -- for them and for the rest of us.