If you're looking ahead to next week and you love theater, you're in luck.  Not one but two tantalizing events are happening on Monday, theater's normally "dark" night. 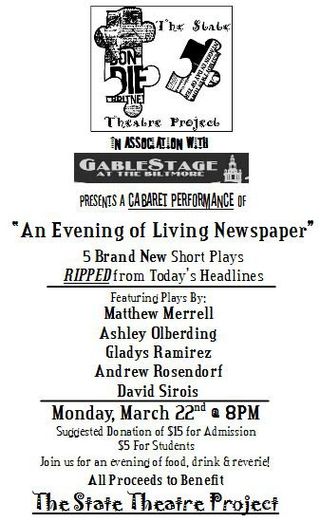 At GableStage, the new State Theatre Project presents the second edition of An Evening of Living Newspaper.  Matthew Merrell, Ashley Olberding, Andrew Rosendorf, Gladys Ramirez and David Sirois (who is, just now, giving a sizzling performance in the Alliance Theatre Lab's production of Orphans) have all written new short plays on timely themes -- subjects, as the company puts it, "ripped from the headlines."

Admission to the fund-raising event is a suggested $15 donation ($5 for students).  For more info, call the GableStage box office at 305-445-1119 or visit the its web site 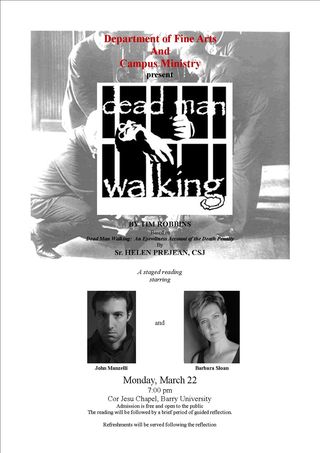 On Barry University's campus in Miami Shores, Monday brings a staged reading of actor Tim Robbins' play Dead Man Walking.  A really fine cast of South Florida actors, Barry faculty members and students will read the play, which is  based on the work of Sister Helen Prejean, a nun who became an outspoken opponent of the death penalty.

The reading takes place at 7 p.m. at Barry's Cor Jesu Chapel on the campus at 11300 NE Second Ave.  Admission is free.