« A disturbing play gets a reading | Main | A musical, a play, a reading »

News about Cruz, Heuer and Whitehead

It's the thick of the season, and though this weekend brings a little lull in the recent frenzy of openings, there's still plenty of arts news to share.

The lineup for the 2010 Ringling International Arts Festival has just been announced, and among the four premieres that will kick off the festival at 7 p.m. on Wednesday, Oct. 13, is Capricho, a brand-new commissioned work by Pulitzer Prize-winning playwright Nilo Cruz.

Cruz is writing and directing the piece, which will premiere in the historic Asolo Theater at Sarasota's Ringling Museum.  It will be a busy time for him: The world premiere of another Cruz play, The Color of Desire, is slated to kick off the 2010-2011 season at Actors' Playhouse in Coral Gables Oct. 6-Nov. 11.

Also part of the next festival are Moscow's Theater Art Studio performing The Boys (based on The Brothers Karamazov) in Russian, and British performer Andrew Dawson in Space Panorama; cabaret performers Sanda Weigl and The Takeishis in Gypsy in a Tree, and jazz performer Kate Davis; and dance performances from Les Slovaks Dance Collective, Rubberbandance Group and the John Jasperse Company.  The festival, a collaboration of the John and Mable Ringling Museum of Art and New York's Baryshnikov Arts Center, happens Oct. 13-17 at the bay-side Ringling complex in Sarasota.  Package tickets are on sale now, with tickets to individual events going on sale May 15.  Call 941-360-7399 or visit the festival web site for more information. 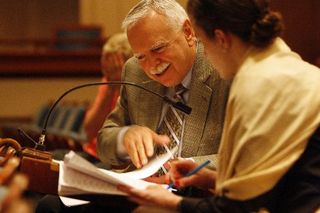 Robert Heuer, the General Director of the Florida Grand Opera, was honored last month with a spectacular concert celebrating his 25 years of leading the company.  Now comes word that next month, Heuer will collect another honor for his South Florida arts leadership.

Heuer has just been chosen the 2010 recipient of the George Abbott Award for Outstanding Achievement in the Arts in recognition of his work with Florida Grand Opera and the key role he played in getting Miami's Adrienne Arsht Center for the Performing Arts built. The Abbott, which recognizes achievement in any facet of the arts, is the major award presented at the annual Carbonell Awards (which, of course, honor the best work in South Florida theater during the previous year).

This year's ceremony takes place at 7:30 p.m. April 12 in the Amaturo Theater at the Broward Center for the Performing Arts, 201 SW Fifth Ave., Fort Lauderdale.  Tickets are $25.  Call the Broward Center box office at 954-462-0222 or visit the center's web site for more information. 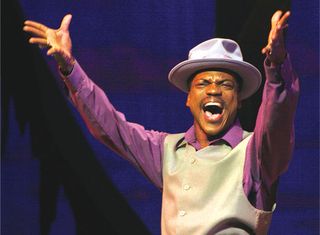 And speaking of Carbonell winners, Miami's own Reggie Whitehead has been touring in a production of Porgy and Bess, winning raves for his performance as the charismatic Sportin' Life -- check out a sample on You Tube.  The tour of this George Gershwin-Ira Gershwin-DuBose Heyward masterpiece brings Whitehead back home, quite briefly, for a performance at 3 p.m. Sunday at the Miami-Dade County Auditorium, 2901 W. Flagler St., Miami.

Tickets cost $25 to $65.  For information, call 305-547-5414 or get tickets via the Orchestra Miami site or via Ticketmaster.  And a special note, if you happen to be older than 12 but younger than 23:  Culture Shock Miami is offering tickets to Porgy and Bess for just $5 each.