One more theater 'prom' is history 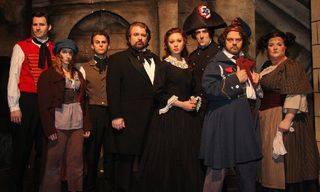 So the 34th annual Carbonell Awards happened last night, with not too many surprises except for everyone singing Happy Birthday to Oscar Cheda (visiting for the evening from his road gig with In the Heights) and a late-in-the-show tribute to Carbonell-winning sound designer Steve Shapiro, who's leaving South Florida for a prestigious teaching job.  But of course the winners were surprised -- some more so than others.

John Manzelli, for instance, who now teaches at Barry University and is a Naked Stage founder, won best lighting design for his work on Marco Ramirez's Macon City: A Comic Book Play.  Manzelli, as he admitted in accepting the award, isn't reallya lighting designer.  But he's a multi-talented guy -- actor, director, teacher and, yeah, now lighting designer -- who figured out how to make Macon City look way cool. And now he's got a Carbonell to show for it.

The night's dominant theaters (check out my Miami Herald story for full results) were two Coral Gables companies with a gazillion Carbonells between them, Actors' Playhouse and GableStage.  Their wins -- six to Actors' for its great production of Les Misérables, five to GableStage (for Speed-the-Plow and Farragut North, plus the special Bill Von Maurer Award for the company's contributions to South Florida theater) -- were certainly deserved.  But if I were running a theater in Broward or Palm Beach County, I might be questioning (to put it mildly) the voting process today.  (For the record, I'm not among the folks who select Carbonell nominees or vote on winners.)

The opening year-in-theater number, though ably sung to the tune of The Twelve Days of Christmas by the Carbonell "Choir" (Steve Anthony, Irene Adjan, Barry Tarallo, Christopher Kent, Lisa Manuli, Julie Kleiner, Sally Bondi and the very bearded Avi Hoffman, in rehearsal for GableStage's The Quarrel), wasn't as clever as last year's opener.  The numbers from the nominated musicals were terrific, particularly Nathaniel Braga's head-over-heels Bigger Isn't Better from the Maltz Jupiter Theatre's Barnum, Everett Bradley's sexy a capella Some Like It from Caldwell Theatre's Vices: A Love Story, and the night's showstopper, David Michael Felty's glorious Bring Him Home from Actors' Les Miz.

Winners and presenters were on their best behavior (though presenter Ken Clement tried to get some faux bad blood going with the Women's Theatre Project).  GableStage's Joseph Adler, when not onstage accepting awards, got thanked a lot. Gregg Weiner, named best supporting actor in a play for Farragut North, said, "There's not a show that goes by that Joe doesn't bust my ass," something that always pushes him to get better.  Mad Cat Theatre founder Paul Tei, who had spent the day shooting Burn Notice, won best actor in a play for GableStage's Speed-the-Plow, and he happily detailed his career-long love of the play, his great recent experience with it (castmate Amy Elane Anderson is now his girlfriend) and his gratitude toward Adler, whom he called a "mentor and my second father."

All in all, it was a pleasant, inside-South-Florida-theater event, without the dramatic highs or lows that have marked past ceremonies.  Now that London is in charge of the Carbonell organization, it will be interesting to see how the always-delicate relationship between the theater community and those who carry out the Carbonell process evolves.