Here's a mixed-bag theater nosh, just before a monster theater weekend in which six -- yes, six -- shows are opening Friday and Saturday.  (Those would be The Quarrel at GableStage, Raised in Captivity at New Theatre, Going To See the Elephant at The Women's Theatre Project, The Sum of Us at Rising Action Theatre, Suds at the Broward Stage Door Theatre and Three Tall Women at Palm Beach Dramaworks,)  Whew!

*  Tarell Alvin McCraney, one of the two hottest playwrights to come out of Miami (Nilo Cruz being the other, of course), has just become a member of Chicago's Steppenwolf Theatre Company Ensemble.  McCraney acted in the Tina Landau-directed Theatrical Essays at Steppenwolf when he was doing his undergrad work at DePaul University, and his Brother/Sister Plays trilogy is playing at Steppenwolf through May 23.  The company has commissioned him to write a new play based on the biblical book of Job.

*  Opera/musical theater students at Miami Dade College's Wolfson Campus are beckoning one and all to come to their Cabaretthis weekend.  Performances are at 7 p.m. Friday and Saturday in MDC's Chapman Conference Center, 300 NE Second Ave., Miami.  Tickets are just $10 (only $5 for students, faculty and staff).  Call 305-237-7331 for info.

*  The Kosher Cheerleader, titled The Cheerleader and the Rabbi when it played the Hollywood Playhouse in 2008, has been retooled and redesigned for its current run at Fort Lauderdale's Parker Playhouse. Engaging, funny author and star Sandy Wolshin recounts her unusual journey from L.A. Raiders cheerleader to modern Orthodox 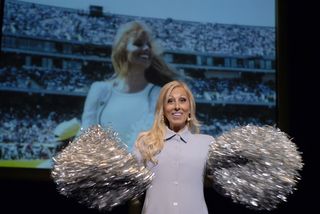 Judaism but still proves she can cartwheel with the best of 'em.  Arnold Mittelman, former producing artistic director at the Coconut Grove Playhouse, directed the new production and is presenting it under the dual umbrella of his two companies, the American Theater Festival and the National Jewish Theater. Tickets are $19-$45, and remaining performances are at 2 and 8 p.m. today, 8:15 p.m. Saturday and 2 p.m. Sunday. Call the box office at 954-462-0222 for info.

*  If you're free Monday, check out the free reading of Tony Finstrom's After Dark (described as All About Eve meetsThe Devil Wears Prada) at GableStage in the Biltmore Hotel, 1200 Anastasia Ave., Coral Gables.  Show time is 7:30 p.m., and Stuart Meltzer directs a cast that includes Iris Acker, Jeffrey Bruce, Todd Bruno, David Hemphill, Miriam Kulick, Michael McKeever and Andy Rogow.  A discussion with Finstrom and the actors follows the reading.