« 'Miranda Sings' and more | Main | Ground Up settling down » 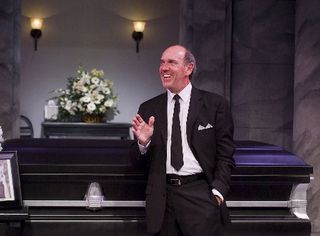 Carbonell Award-winning actor Gordon McConnell (pictured here in Mosaic Theatre's Wrecks) will star in the southeastern premiere of Bob Clyman's comedy thriller Secret Order.  McConnell plays the famous administrator of a New York research lab where a brilliant young scientist claims to have discovered a cure for cancer.Secret Order will run July 7 to Aug.1 and will be directed by Tom Bloom, who has been involved with the script through its developmental process.

Broadway veteran Robert Cuccioli, who got a Tony Award nomination for his title performance in the musical Jekyll & Hyde, will star in the Caldwell's world premiere of Joel Gross' The Comfort of Darkness, to be directed by artistic director Clive Cholerton.  The play is described as a "slightly fictionalized" version of the story of Dr. Anton Mesmer, whose theories led to the development of hypnotism -- and to the word "mesmerizing."  Gross' drama is a love story centering around Mesmer's treatment of the young blind pianist Maria Theresa von Paradis.  It will play Aug. 11 to Sept. 5.