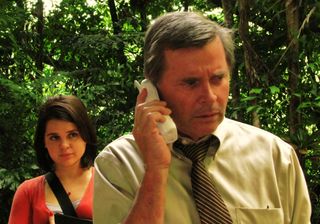 Pinecrest Repertory Theatre has been dormant for a couple of years -- money troubles, no surprise during the recession -- but the company is back this weekend with a production of David Mamet's Oleanna.

Mamet's still-controversial 1992 play, about a professor up for tenure and the student whose accusations help derail his future, stars Greg Schroeder as John and Bertha Leal as Carol.  Pinecret Rep founder and artistic director Max Pearl is staging the play in the company's lush home at Pinecrest Gardens' Banyan Bowl.

Plans are in the works to turn the 550-seat domed amphitheater at the former home of Parrot Jungle into an enclosed performing arts center, with Pine Crest Rep as its resident theater company.  But you can see what the group has to offer at 2 p.m. Saturdays and Sundays through June 6.  Banyan Bowl is at 11000 SW Red Rd. in Miami.  Tickets are a bargain-priced $15 ($12 for students, seniors and military personnel). For info, call 305-378-8239, email pinecrestrep@yahoo.com or visit the company's web site.