Gordon McConnell, one of South Florida's finest actors, became ill after performing Saturday's matinee of Secret Order at the Caldwell Theatre Company in Boca Raton.  He was hospitalized and, though he's expected to be released today, there's no word one when or if he might be returning to the play.  No definitive word either on why he became ill.

Though Saturday evening's performance was canceled, director Tom Bloom stepped into McConnell's role, playing a research lab director opposite the young scientist played by Nick Duckart.  Bloom is to continue performing, book in hand, this week, though he hopes to be off book -- to have the role memorized -- late this week.

The irony here is that in March, it was McConnell who came to the rescue when a different Caldwell actor became ill.  David Pendleton, who was playing the title role in The Old Man and the Sea, was hospitalized after suffering a stroke, and McConnell took over.  Here's hoping that this terrific actor is back in action soon.  For Caldwell info, visit the theater's web site; the show runs through Aug. 1. 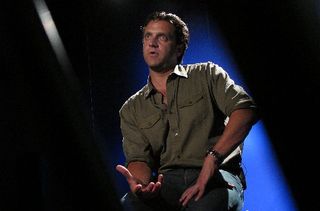 Raúl Esparza just finished his brief run in Babalu at the Arsht Center, and he's soon heading for Los Angeles to star in the Broadway-bound musical Leap of Faith.

But before the Miami-raised four-time Tony Award nominee leaves his hometown, he's making time to give back to a program that gave much to him (he participated in YoungArts in 1988 and received an alumni award in 2009).  From 3:30 to 5 p.m. Tuesday, Esparza will deliver a workshop titled Approaching Broadway to talented high school students as part of YoungArts Miami's regional summer program.  Students will learn how to "act" a song as they present two short excerpts from Broadway songs (bring sheet music).  Esparza requested that one of the two be by Stephen Sondheim, an artist whose work the actor knows well:  He starred in both Sunday in the Park With George and Merrily We Roll Along during the Kennedy Center's Sondheim Celebration, then went on to earn one of his Tony nominations for playing Bobby in the Broadway revival of Company.

Participation is limited to Miami-Dade high school students, who must pre-register by emailing miami@youngarts.org or calling 305-377-1140, ext. 1309.  Space is limited, and the session takes place at the Peacock Education Center in the Arsht's Knight Concert Hall, 1300 Biscayne Blvd., Miami.